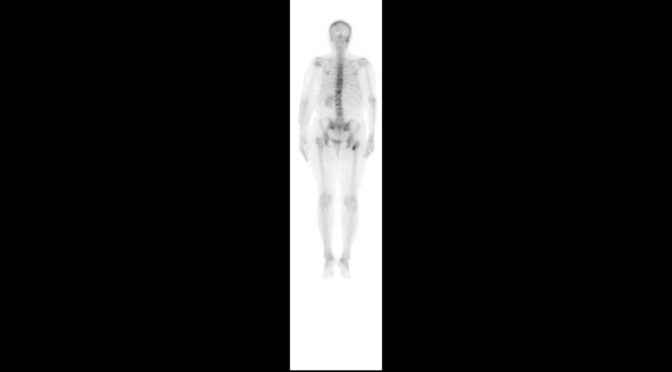 A 70-year-old woman had a diagnosis of breast cancer several years earlier. In a recent visit the patient referred back pain and a difficulty to walk, without muscular strength in her legs.

The medical oncologist that attended the patient at that moment, thought in a spinal cord compression as the first diagnostic possibility, a thought supported by the symptoms and the presence of metastases in the bone scintigraphy. The physical examination did not include a complete neurological assessment  to determine if there was a sensitive level.

Subsequently, during the evolution, the initial diagnosis of spinal cord compression was not demonstrated.

The patient was in a weak condition and she stayed in bed  most of the time, although she could move the lower extremities at a thirty-degree angle and maintained strength, but could not stand without help. There was not a neurologic sensitive level.

The patient reported that she could not sit because the pain in her left hip, although an uptake increase was described on the right side of the bone scan.

Right or left?  The first thought of the doctor was to think that the report of the bone scan could be mistaken, because the pain was on the left side and the report informed that the metastases was on the right side. Or maybe, she thought, could it be a lytic lesion on the left side, usually not detected by the scan?

Some comments can help to increase the safety of this clinical scenario:

2.Each diagnostic test has its specifications and sensitivity and specificity. In the case of bone scintigraphy, the absence of uptake in a pure lytic lesions is well known.

A course of survival for interns and last year medical students. Chapter three: What not to do.
Clinical Reasoning: A blood test cannot be ordered on itself
Real clinical scenario: How to put things together? A paresis
Deliberate practice: the secret to improve in Medicine
Bone findings in cancer patients mimicking metastases (and 3)