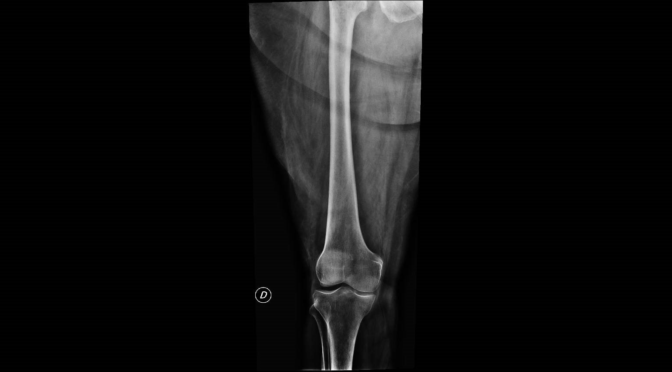 To show the importance of the communication between physicians in a particular clinical case, together with the contribution of some systemic factors in a case of diagnostic error.

We are considering a 68-year-old woman with a deformity in her left foot after poliomyelitis,  with a diagnosis of metastatic breast cancer a year before. She stayed at the hospital with a strong pain in her spine. In the medical record was written: “the back pain irradiates to her right leg”.

The patient was treated with radiotherapy over the spine with a clear improvement , but she was still feeling pain in her right thigh, although she was able to sit in a chair and to go to the bathroom.

Here we see the first X-ray:

All the images have the consent of the patient

The attending who was visiting the patient in a daily base saw the   X-ray and he couldn´t see a fracture, but at the same time he was very upset because the hip was not included. Although the patient was improving  and even she could go to the bathroom, the doctor considered that he could wait to see the evolution, and his thoughts confirmed the first impression that the patient didn´t have a fracture.

The patient was improving day by day after the treatment with radiotherapy, but she was still feeling pain in her right leg. The attending  revisited the blood and radiological tests and he saw more projections of the right leg that he didn´t see before. What happened?  Did he forget to look at the x-ray? Or were they included a day later? We really don´t know. The truth was that the doctor was really surprised.

We show here the new images

Bone fracture in relation with metastases

There are several steps that we can consider with a direct influence in the diagnostic delay of this case:

. Every doctor assumed the evaluation of the first doctor, because there was a logical way of thinking: metastases in the spine are painful and the pain can irradiates  to the legs if there is a compression of the nerves.

. When you ask for an X-ray you don´t know how many images you are going to get. It would be safer to know the number because if not you can miss some of them.

. The radiologist, not only the technician, must supervise taking the images, because he or she is the one able to detect a pathological finding.

. Always go back to the patient and repeat the anamnesis and the physical examination. This attitude can give you the clue of the symptoms of the patient. After a more detailed physical examination the attending discovered that the right foot was externally deviated, a clear sign of a fracture in the femur or the hip.

. The transmission of the information of a patient doctor-to-doctor is a very important moment- No “close loop” are recommendable to transmit the information, it is better and safer to describe the symptoms to the next colleague and let him or her think about it.

The red color. Chapter 2
Do you think it could have been done better? Abdominal pain, nausea and vomiting
Case analysis: pain in the ankle
The replacement of a biliary catheter and the Boeing 737 Max: An example of a  system failure?
Case Analysis: a problem of perception