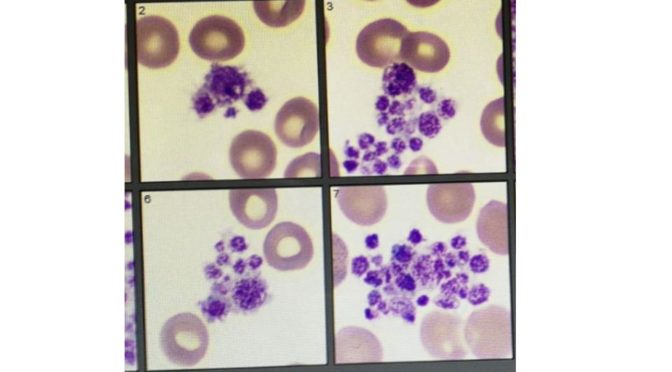 Pseudothrombocytopenia : a system analysis for a good detective

A 59-year-old woman was receiving treatment with radiotherapy and weekly cisplatin, after a diagnosis of cervical cancer. After three weeks her platelet level was under 20.000 and she was put under

observation. There were no signs of splenomegaly or liver disease. She was treated with prednisone but she maintained a low platelet count reported by automated hematology analyzers.

Final Diagnosis: Pseudothrombocytopenia.   Commonly, this clumping is caused by an alteration of the platelet surface glycoproteins when they are incubated with a calcium chelator such as EDTA.  These modified platelet antigens, then react to anti-platelet autoantibodies. The machine can discriminate for individual platelet inside these clumping.

A simple clinical situation like this put the patient at risk for several reasons:

1) Pseudothrombocytopenia delayed the treatment for a curable disease, increasing anxiety in the patient.

2) The patient was not treated with prophylactic heparin, due to the misconception about the platelet count.

3) There was a bleeding risk with a high probability to indicate a platelet transfusion.

This case shows the direct relationship between the “system” and the clinical reasoning process. We believe that an automated process is always exact and safe, but exceptions to the rule can be always present, as it was in the case when EDTA was used as an anticoagulant. When the concordance between clinical situation and data is not logical, our clinical judgment must always prevail. A system problem was at the base of a diagnostic error in this case.

Resist and not give up: the key to fighting premature closure
Case Analysis Theater
A Descriptive Explanation Of The Problem Is Also a Diagnosis. Helping to Close The Circle
Reversible posterior leukoencephalopathy: difficult to detect if you have another explanation
I know that the patient is bleeding, but why? Not always Yin or Yan