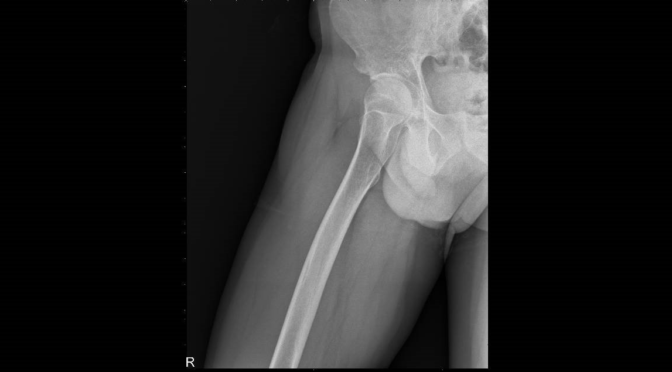 Diagnosis of an autosomal disease

Nowadays, the genes are touching every medical area. The genetic code of several diseases has been disentangled and  the level of human transmisión has been clearly elucidated. From a didactic  point of view, the genetic material is shared by the germinal or “sexual” cells and the somatic cells. The chromosomes bring together all genetic material, and the genes are the operative units of expression of the genetic traits.  Each genetic characteristic is determined by a pair the genes, but  sometimes , just one is the responsible for the expression or the disease, this is what we call a “dominant” gene .

Imperfect osteogenesis is a disease associated with a defect in the protein  collagen type I, with 17 types of clinical pictures different,  but all of them have in common an increased risk of bone fractures.

When the disease is not detected intrauterine, the increased frequency of bone fractures is a hallmark sign for the diagnosis.

Unfortunately, the majority of autosomal diseases can’t be detected before birth and in many of them there is not a treatment for now.

The emotional and psychological impact of a BRCA positive test

The probability of a transmission of this gene from a positive mother is 50% for every child. Then, in this situation a woman has to decide between to have a family or to eliminate the risk of ovarian and breast cancer.

The  only practical solution for now will be a bilateral salpyngo-ooforectomy and a close examination with MR of the breast. A positive test in her daughter will determine a close follow up of her breast and ovaries after 25 years of age. Also, a positive test in her son will determine a follow up of the prostate starting after 40 years of age. The gene keeps its presence  in a family, with different penetrance, and this mode of inheritance is a real challenge for the next generation.

Can we do something to stop the dissemination of the gene across a family?

When you are a young woman without children and you know that you have a positive BRCA mutation, there are different alternatives to be decided.  First, you can elect a bilateral salpyngo-oophorectomy around the age of forty, with a close monitoring of the breast. Another option is to try to select an embryo without the mutation using the Preimplantation Genetic Screening (PGS) technique. This methodology is not widespread  across all the countries, and it is not an easy procedure. (1-2).

The emotional and psychological attitudes for a genetic testing for a woman with a positive BRCA test are not uniform, and there is a lack of a definitive answer.  For some women the first priority is to stop the development of an ovarian cancer, but for others , the preference is to stop passing the mutation to their children. Even with the possibility to have a genetic manipulation to select an embryo, some women decided to go ahead with their pregnancy, thinking that in the next future there will be new therapeutic advances to control the breast cancer associated to the BRCA mutation (3).

Upper left abdominal pain: the origin may be in the spleen
Dr. Adolf and the case of allergy to penicillin. Chapter 2.
Urinary Bladder Perforation: an infrequent complication for a clinical reasoning exercise
Low-molecular-weight-heparin : it is not so easy as you could think
Melanoma: subcutaneous metastases