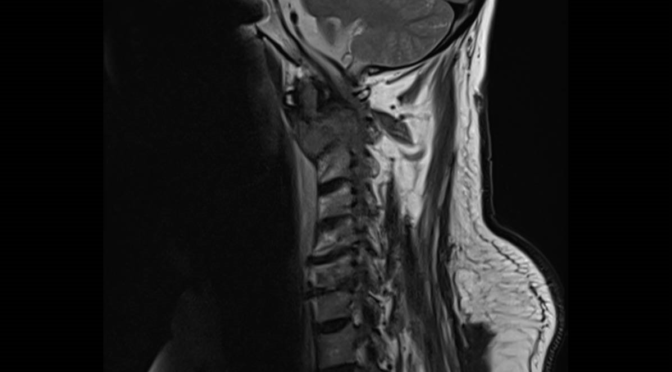 The importance of the vertical line: when a patient can´t stand-up

The human body has adapted over a thousand years of evolution to the vertical position, only when we rest we feel more comfortable lying down. The force of gravity has a strong influence over  our body and with every  movement we are spending energy fighting against it.However,  for other physiological functions such as swallowing, breathing,  bowel movement, or the circulation, the gravity force is an allied. When, for different reasons, a patient has to stay in bed for a long period in a horizontal position, the probability of a complication increases significantly.

Moreover,  a patient with a lack of mobility, for instance a spinal cord compression, a bone fracture or even fatigue, is a challenge for a physician and some important data can be missed during the physical examination.

A 67-year-old man with a diagnosis of  metastatic prostate cancer went to the hospital referring a strong cervical pain, exacerbated with a minor movement. He had to stay in bed for this reason.

#Question 1 : What is the main risk for this patient? If you want to select possibilities click here

Usually the treatment for this problem is resting in bed, steroids and othopedic device for the neck and local radiotherapy. Two days after his admission the patient started with chills and high fever, but, after receiving analgesic and steroids, there was no more fever in the next three days.

On the fifth day after the admission the patient was mildly disorientated, but he was alert  and he could speak normally and to maintain a conversation. Blood pressure was normal. The glucose  and calcium level were normal. He was lying in bed at least for five days due to the pain . In this situation the physical examination, specially the pulmonary auscultation was very difficult for the doctor.

On the sixth day after admission the patient started with shortness of breath and his oxygen saturation without oxygen dropped to 80%.

There are several situations with a strong influence on the final outcome with a patient. For instance, just lying down in bed in a hospital, increases the risk of deep venous thrombosis and this is the reason for the indication of prophylactic heparin. The body is used to stay in a vertical position most of the day, and the physiology of the organs is adapted to this fact: swallowing, breathing and pulmonary secretions, bowel movements, urination, and many more.

In this case a combination between an abnormal respiratory function and aspiration to the bronchus during eating, could be at the origin of the problem.

COVID-19, Yes or Not? No definitive answer
How long does it take to a new diagnosis to be "popular"?
Molecular Oncology: a step further in diagnosis linked to treatment
Diagnostic delay and models of cancer care
Thinking in the worst case scenario is safe, but the opposite can be true