A 74-year-old woman went to the emergency room for lower extremity pain. There were no pathological data except for arthroscopic deformities in the knees. Analgesic treatment  was indicated  with an opioid drug.

Two days later the patient came again after suffering a fall and not being able to mobilize her  right leg. The physical examination showed that she was unable to stand, falling to the right side because she had no strength to support her body. The case was submitted to a neurologist and a cerebral CT was indicated that showed a doubtful lesion in the left temporal region that could be compatible with a cerebrovascular accident, and the symptoms were associated with this image.

EVOLUTION: The patient reported intense pain in the right leg, which forced a reevaluation a few hours later, evidencing edema throughout the right ankle. A previous ankle radiograph was re-evaluated, which had been reported as compatible with normality, but, when the image was more closely observed, showed the presence of a bilateral fracture.

. Incomplete clinical data or badly collected: no anamnesis or complete physical examination of the patient

. Premature closure: no other alternatives that could explain the fall

. To hang labels without objective confirmation, as it was the assumption of the presence of a possible cerebrovascular accident that was inconclusive in the images.

B) RELATED TO DIAGNOSTIC TESTS

Perception problem: a linear lesion in a bone is one of the images that go unnoticed more easily. Enlarging the image allows and facilitates sometimes a better appreciation and a correct diagnosis 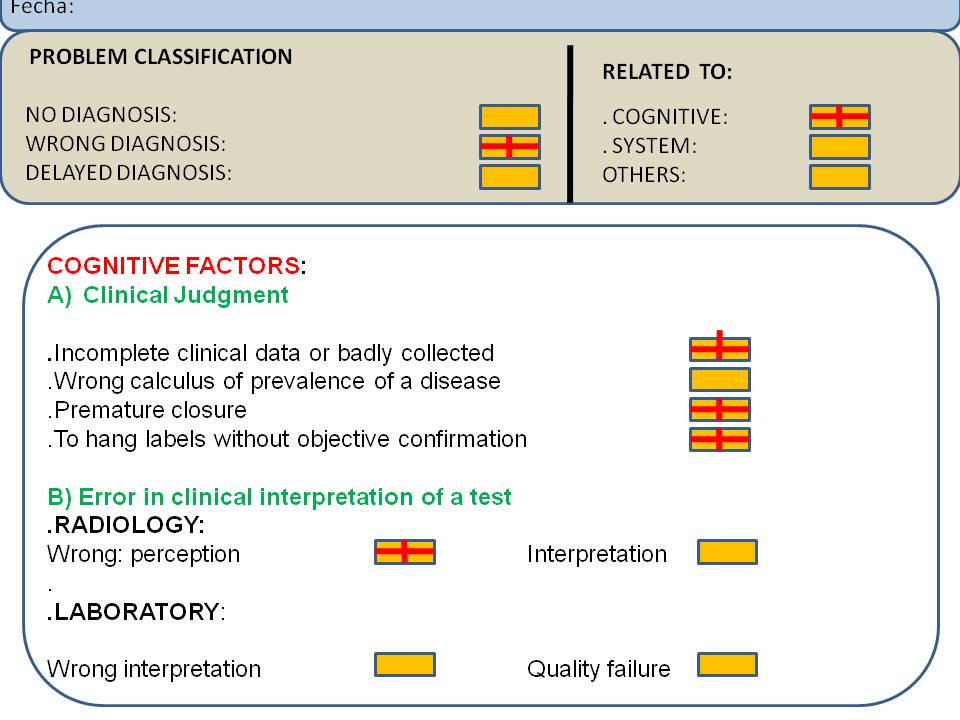 The System and the human perception: a common interaction
Clinical case: non-productive cough at bedtime, disappears upon rising
A silent enemy that you have to look for. Without symptoms there is no diagnosis
"Blindness" to another problem during the COVID-19 pandemic: a clinical case
Low-molecular-weight-heparin : it is not so easy as you could think