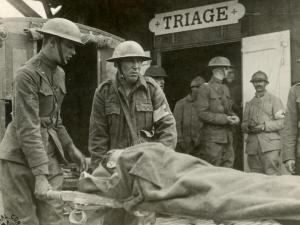 The word “triage” in the Emergency Department (ED)  define a system of prioritizing patients  based on the severity of their condition. The term seems to be originated in the napoleonic wars to classify the wounded soldiers in three(tri) categories: the ones who were going to die anyway, the ones who were going to live and the ones who could survive with a rapid attention. In summary “triage” priorizes, but.. is it working properly with oncological patients looking for assistance to a general ED?

Triage in our modern ED assumes that not all people can be treated at the same time beacuse the resources are scarce, and the attention to some patients can be delayed if the medical situation is not going to change the prognosis too much. But when a nurse says: “pain in the leg in an oncological patient” some negative label is attached to that patient and an urgent attention such as a bone fracture or a deep-venous thrombosis can be postponed.

Triage is now a magic word for managers but we have to remember that this is just a procedure of selection  based on intuition, clinical experience and some objectives data, with a high possibility of introducing a negative bias for a proper attention , mainly when the person in charge of the main decision is influenced in his or her reasoning for a previous diagnosis considered always ominous like a tumor. We propose then a better clinical training for the person responsible of the classification of patients and a decision centered on the principal symptom independent of the label of a previous diagnosis.