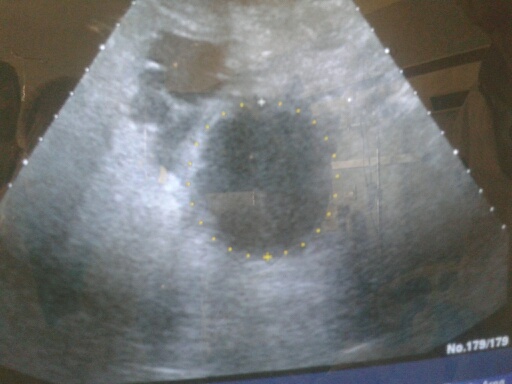 An Urinary Bladder Perforation is an uncommon complication but could be useful for a clinical reasoning exercise.

Juan began with chills, fever and a feeling of discomfort. He went to the Emergency Department and being there his general condition deteriorated, with hypotension and obnubilation, needing inotropic medication. The patient had two double J catheters due to previous obstruction of the urinary tract during radiotherapy for a rectal cancer, but the urologist found that they were not permeable. He decided to do a cystoscopy but could not see the ureter outlet, although he observed the emission of purulent material.

The patient evolved well with antibiotic treatment. We had to place a bilateral nephrostomy catheter and also a bladder catheter, because the renal function deteriorated after removing it from the bladder.

The doctor thought that the bladder was the origin of the septic shock, but how to place each finding in its place? Where did the purulent collection seen in cystoscopy come from?

Inside the doctor´s brain

It was clear that the patient had a septic shock with a possible origin in the bladder  or ureter. The etiology could be related to the catheters, but also,with the toxicity of the radiotherapy that could have originated  a zone of necrosis with fistulización, as it is observed in the image.

Most of the time a doctor does not have a certainty to explain a clinical picture. He/She will use his/her anatomical and pathophysiology knowledge as an initial strategy. He/She also may try to remember a similar clinical picture from previous experiences.

The doctor’s mind is not usually correct, but if his or her mind is inquisitive and follows strategies based on anatomy or pathophysiology, uses common sense and discards serious pictures, possibly his/her clinical intuition will lead to a good result for his/her patient.

"Incidentaloma" and melanoma
CNS ventricules: more than a space?
Who was Dr. Noble from Leicester?
Splenic rupture and mantle cell lymphoma
Did you Know that brain metastases can be silent?